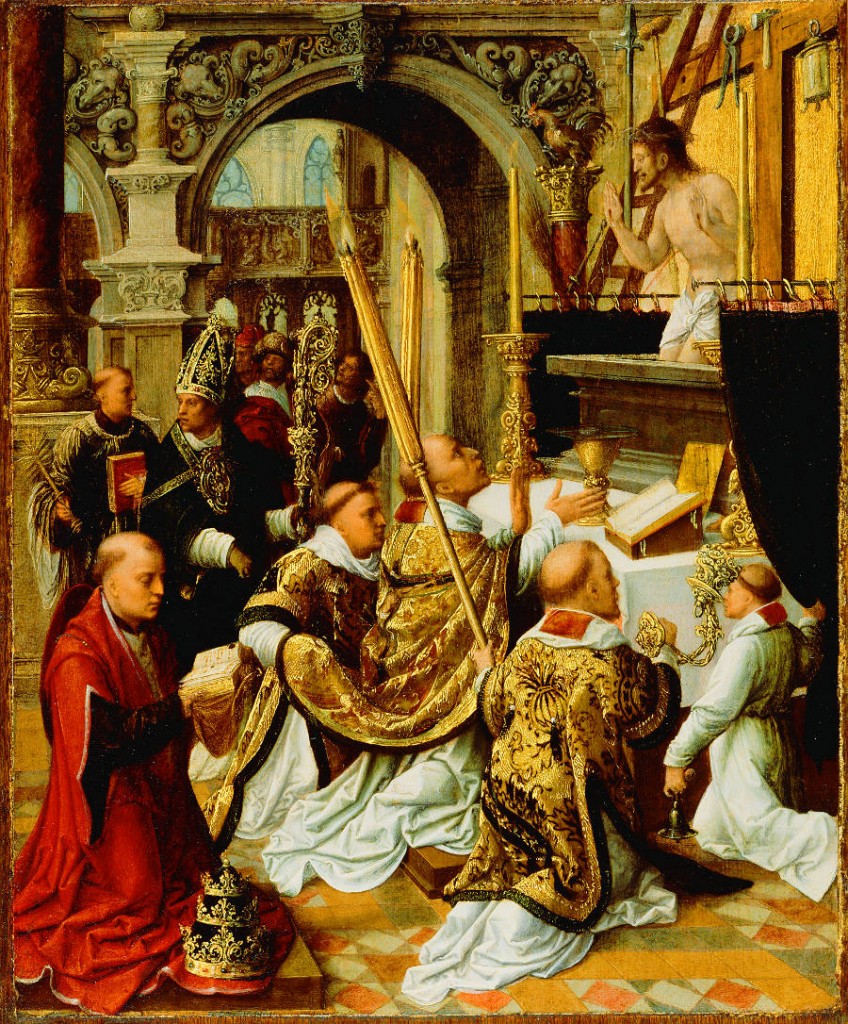 Missa de Venerabili Sacramento It was the week before the Palm Sunday, March 15, 1345. The priest of the Oude Kerk went to visit a sick, dying man in Kalverstraat to hear his confession and administer the Extreme unction and Viaticum and had no idea that the consequences of what he was about to do would still be remembered more than 6 centuries later and be known as The Eucharistic Miracle of Amsterdam. What all the accounts seem to agree on is that the dying man vomited after having received the Blessed Sacrament, the Host was thrown into fire by his caretakers but on the following day it was observed it had remained intact. They called a priest who tried to take it back to the Oude Kerk, but the Sanctissimum kept returning back. The Miracle was promptly confirmed by the city council as well as officially recognized by the bishop of Utrecht, Jan van Arkel. Within little more than 2 years, on October 21, 1347 the chapel Terheylighenstede (The Holy Place, Locus Sacer) was consecrated by the auxiliary bishop of Utrecht, Nythardus. The site of the miracle quickly became a very important pilgrimage destination for the Low Countries and beyond (with some rather important pilgrims, such as, in about 1484, Archduke Maximilian of Austria, who was later to become the Holy Roman Emperor). Considering the importance of religion in the Late Middle Ages as well as the close relationship between religion on one hand and trade and travel of the peoples on the other this must have been a very important factor in the rise of Amsterdam to importance and its flourish.

Fast forward to early 1500’s. After two fires, in 1421 and 1452, the chapel is rebuilt as a rather large hall church with 3 naves of equal height. On the northern end of the transept, on the Kalverstraat side was the ‘holy corner’ (the spot where the miracle had happened) with the fireplace. While detailed information about liturgical observances in the Heilige Stede remain sparse, especially because of the events of the late 16th century, both Corpus Christi as well as the anniversary of the miracle itself must have had an important role and been celebrated with great festivity. (For special occasions there are mentions of the use of trumpets, shawns and drums in processions) There has been also a weekly procession in which the Miraculous Host was brought every Wednesday to the Oude Kerk and back. It is also quite likely, that as in many other churches in this time, a weekly (if not daily) votive mass of the Blessed Sacrament was offered here.

The only official connection of Pompeius Occo to the chapel of the Heilige Stede seems to be his tenure as churchwarden from 1513 to 1518 after which he pursued supposedly politically more important positions in the Holy Cross Guild and the Nieuwe Kerk. Occo was an agent of the Fugger firm in Amsterdam, a very distinctive figure of the merchant elite, a man of learning and devotion as well as a patron of arts. He lived in the Kalverstraat, very close to the Heilige Stede, and it has been conjectured that he retained a special relationship to this institution. Indeed, a poem composed by Alaard of Amsterdam mourning the death of Occo singles out his attachment to this chapel and his many material donations and offerings.

One of these is also the Occo codex, a large luxurious music manuscript from the workshop of Petrus Alamire. There is a very clear liturgical focus on the veneration of the Blessed Sacrament, to which the first section of the book is dedicated. We find here 5 settings of O salutaris hostia, Tantum ergo, a polyphonic introit for Corpus Christi, Cibavit eos, as well as two masses whose melodic material is taken from chants connected with Corpus Christi: Hotinet Barra’s Missa Ecce panis angelorum and Josquin de Pres’ Missa Pange lingua. The second part of the manuscript consists of five more mass settings and one Requiem.

Our programme is based on the votive mass of the Blessed Sacrament (i.e. Missa de Venerabili Sacramento) according to the Missale for the use of Utrecht printed in 1511 in Anwerpen. One of the features differentiating it from the standard Roman use is that the sequence Lauda Sion of Corpus Christi which is normally not used for votive masses does appear here in a shortened form of last four stanza. Plainchant tones for the ordinary of the Mass (such as preface, Pater noster, Ite missa est etc.) are also taken from here. Polyphonic responses (Amen, Et cum spiritu tuo etc.) which seem to have been a typical feature of the liturgical and musical practice in the 16th century come from Codex Smijers, choirbook of plainchant and polyphony used by the Illustrious Brotherhood of Our Blessed Lady in ‘s-Hertogenbosch. Plainchant propers (Graduale, Alleluia, Offertorium and Communio) are taken from an early 16th century Graduale, currently kept in Museum Catharijneconvent which most probably originated in Agnesklooster in Hoorn. It preserves a characteristic notational and melodic variant of Gregorian chant characterstic for the northern Low Countries.

The setting of Cibavit eos which opens the programme is the only one of the motets in Occo codex connected with eucharistic devotions with a fixed liturgical function, sc. the introit of Corpus Christi. Consistent with the form of plainchant introit, it is written in two sections, the antiphon and the psalm verse. While in the verse, the cantus firmus is mostly to be found in tenor, the more contrapuntal setting of the antiphon paraphrases the chant in different, usually at least two, voices. The melodic form of the plainchant employed points to an origin in Germany or the Low Countries (East Frankish chant dialect).

Josquin’s Missa Pange lingua is one of his last mass settings and one of four masses he wrote that are based on plainchant models, which in this case is a hymn for Corpus Christi by Thomas Aquinas. The mass is transmitted in some 26 sources known to us throughout Europe. Curiously, Occo codex presents this composition in an incomplete form. Josquin’s duos for Pleni sunt and Benedictus have been replaced by other, shorter settings taken from Missa Es hat ein sinn by Mathieu Gascongne (trio in case of Benedictus) and second Agnus dei was left out altogether. It is possible that Alamire copyists only later obtained a complete version of this mass and at the time of copying Occo codex worked with a version that replaced Josquin’s rather long, sophisticated and soloistically very demanding settings with easier ones. To present the mass in its complete form we turned to the choirbook Munich, Bayerische Staatsbibliothek, Musiksammlung, Musica MS 510, possibly copied between 1513 and 1519 from one of the earliest known copies of this mass, choirbook MS Cappella Sistina 16.

For the polyphonic settings of Alleluia respond and odd verses of the sequence we use the choirbook Jena,Thüringer Universitäts- und Landesbibliothek, MS 35 that originally belonged to the castle church in Wittenberg under Frederick the Wise. It contains thirteen cycles of polyphonic propers of the Mass, arranged according to the order of the church year, starting with Easter. It has been speculated they might have been composed by Adam Rener, Kapellmester to Frederick the Wise between 1507 and 1517. All of them make exclusive use of strict cantus firmus technique, chant is presented in tenor in equal breves or semibreves, without any rest or interpolated notes and notated in German Hufnagel chant notation.

The setting of O salutaris hostia which we inserted between Sanctus and Benedictus is the very first piece we find in Occo codex. It has been identified as a contrafactum of the second part of the motet Ave regina celorum by Gaspar Weerbeke, the fifth item in a cycle of motetti missales that survive in milanese sources. Considering its place in the cycle and in the Mass this would coincide with the Consecration, ergo it’s homophonic devotional style of breves with fermatas associated with great solemnity (c.f. Josquin’s treatment of Et incarnatus est in Credo) The text used here, O salutaris hostia, is the fifth stanza of the hymn Verbum Supernum, used in the Lauds of Corpus Christi, which however was very often used on it’s own during the Elevation in the Mass as well as in processions (as evidenced by the multiple settings of this text in Occo codex.)

Finally, the programme closes with a setting of Tantum ergo. The text consists of the last two stanzas of the aforementioned hymn Pange lingua, often used on its own in processions and Benediction of the Blessed Sacrament. Stylistically it seems related to the setting of Cibavit eos that precedes it in the Occo codex.